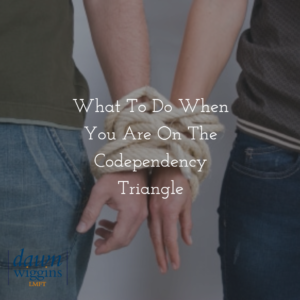 Are you in a codependency triangle? Codependency is a hot topic in the world of pop-psychology. As a recovering codependent, relationship expert, marriage counselor, and family therapist I want to help others recover from codependency as well.

One of my favorite articles by Lynne Forrest; “The Three Faces of Victim – An Overview of the Drama Triangle” she teaches us about how the codependency drama triangle works. This crazy codependency triangle has many names, but they all refer to the same pattern.

I want to teach you what to do when you realize you are on the codependency triangle.

“Victim-hood can be defined by the three positions beautifully outlined in a diagram developed by a well-respected psychiatrist, and teacher of Transactional Analysis, named Stephen Karpman. He calls it the “drama triangle,” I refer to it as the "victim triangle.” Says Forrest. Whether we know it, or not, most of us react to life as victims. Whenever we refuse to take responsibility for ourselves, we are unconsciously choosing to react as victim. This inevitably creates feelings of anger, fear, guilt or inadequacy and leaves us feeling betrayed, or taken advantage of by others.

“Because through it we unconsciously re-enact painful life themes that create shame. This has the effect of reinforcing old, painful beliefs that keep us stuck in a limited version of reality. No matter where we may start out on the codependency triangle, victim is where we end up, therefore no matter what role we’re in on the drama triangle, we’re in victim hood. If we’re on the triangle we’re living as victims, plain and simple!”

Watch the video below to learn more about how to leave the codependency triangle or scroll down to read the highlights.

Forrest explains the three roles on the triangle.

These two – the Rescuer and the Persecutor – are the two opposite extremes of Victim. But again, regardless of where we start out on the triangle, all roles eventually end up in victim. It’s inevitable.

This doesn’t prevent them from feeling highly resentful towards those on who they depend. As much as they insist on being taken care of by their primary rescuers … they nonetheless do not appreciate being reminded of their inadequacy.”

Now, what to do about it…

4 Steps You Need to Leave the Codependency Triangle

The labels aren’t pretty. Most people I talk to hate the possibility they are in the role of victim.

Some key signals for you to spot:

Each of these examples are rooted in victim, rescuer or persecutor.

Once you accept and realize you have jumped on the codependency triangle, you can make a conscious choice to change your pattern.

This is a list of specific behaviors that need to stop so that you can feel at peace and your relationships can heal.

You may be asking “how do I just stop?”

The short answer is make a choice and follow through.

Every time you catch yourself doing one of these things, consciously choose to do or think something positive. These behaviors become unhealthy habits that need to be broken just like any other habit.

If this feels like a lot to do at once, it is.

Take one thing at a time and just start.

Change, growth and healing are all a process.

Most people get frustrated and quit when they don’t immediately get the results they are looking for.