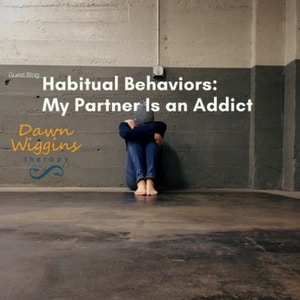 Anonymous guest post from one of my psychotherapy clients: Do you have habitual behaviors? My husband does. And I realize, I do too. Most days he’s not even ashamed of it.

He wears “Keys Disease” (aka an alcoholic under the guise of “laid back”) like a badge of honor. My husband is a chronic alcohol and drug user.

And, frequently puts his wants before his family’s needs.

Habitual Behaviors? Me too!

I sat down to journal my frustrations with my husband and finally realized after writing this– Me too. I am also an addict of sorts. Let me explain…

I suppose I began seeing signs of my struggle years ago.

Things like obsessing over where he was, if he was safe, counting his drinks, worrying what other people thought about his drinking, trying to put a positive spin on everything when we hung out with friends.

It got me thinking: do I have addictive behaviors, habits, obsessions the same way my husband is drawn to his drink and drugs?

When I began this journal entry, I focused on discussing the usual suspects: Drugs, alcohol, gambling, sex.

After all, these are mainstream addictions associated with recovery. The ones written about by brave survivors and their loved ones. These are no doubt dangerous and painful struggles that affect a sufferer’s entire circle of supporters. A disease that is not overcome without intense recovery therapy.

My Husband’s History of Alcohol and Drug Use

And, I had plenty to write about given my husband’s history of alcohol and drug use.

His deeply cemented family history of alcoholism. (Mine too for that matter).

And, the generations of families and friends he (we) grew up around that functioned within the disease.

We are BOTH Addicts to Habitual Behaviors

But, alcohol and drugs were only parts of the addiction my partner suffered.

I decided the truth is we are BOTH addicts to habitual behaviors.

I was finally willing to see my patterns of addiction too.

Maybe “Wife Continually Belittles Husband” isn’t the next striking headline about addiction, but I realized these patterns could be just as lethal to our relationship.

Everything Started Twelve Years Ago …

Rewind 12 years to the time I met my current husband.

It was my first day at a new job. I just finished the HR parade to my desk past 100 other cubicle encased eyeballs peering up at ‘the new girl.

It was then I felt his gaze penetrating my temple.

Like a magnet, I could feel the pull getting stronger as I neared the 4×4 workspace I would inhabit for the next 9+ hours a day.

With each step, an excited nervousness emerged until I found myself seated across from his kind, penetrating gaze.

He didn’t introduce himself at first.

Instead, he waited for our shared supervisor to make the introductions.

After that shake of hands, he quickly volunteered to train me on each of the 27 programs I’d be responsible for learning. I briefly excused myself to the restroom to check on my appearance, breath, and to chug my coffee. I hurried back to his desk for my proposed training session. In those first few moments, our energy was intense, infectious even.

This ‘new girl’ and ‘new job’ thing was easy, thrilling even.

My questions were hushed, my answers enthusiastic and my smile, permanent.

Listening to his instructions felt like wrapping up in a cozy blanket.

Strangely, I had never felt soooo content letting someone else instruct me on a task. This was unfamiliar territory for me, being a self-proclaimed control freak and all. He seemed equally enthralled. Lunchtime came, and without hesitation, I asked him to join me. I was practically skipping at the chance to chatter away about non-work related topics.

I was also very married.

That admission did not settle in my brain until I was taking the bus home later that evening.

Recalling my reality, I stared at my new friend’s # on the screen of my phone.

Wondering if it was too soon to send a polite “Thanks for showing me around see ya tomorrow” text. I sent it anyway. And with his immediate reply, my obsession with him was formed.

It’s a Wednesday night, and there I am with a screwdriver in hand removing the punch-pad from our keyless entry door.

I’m watching him leave for “the final time.” I lie to myself as he drives away. What starts as a casual discussion about my wish for more gratitude and respect ends in our habitual pattern: fight, abandon, threaten, plead, cry, truce.

Our fights almost never end any other way then …

The only things that ever changed were my reason for initiating the ‘talk’ in the first place.

But even those reasons (all 14 or so) are the same. They rotate depending on which day of the week it was. It always ends with him leaving, followed by my threats to remove him from our lives, a barrage of angry calls/texts and eventually a reluctant but welcomed entry back home.

In the early days, the fights were almost always over his alcohol or drug abuse. Over the years I’ve attempted to show him how his choices affect the quality of our family life. I excused all his behavior by blaming his addiction. Everything wrong in our lives became his addiction’s fault.

So What is it that You Are Working On?

After four more years of this, I sought out my friend who doubles as a therapist and reluctantly spill a plea for advice.

After kindly listening she asks, “So what is it that YOU are working on?”

Startled at the mere idea she might be taking his side, I challenge her.

She phrases the question almost precisely the same way.

I try to blink her question away and form an excuse in my mouth. It’s not emerging. I have an answer for this, surely.

I have a laundry list of all HIS faults and wrongs but can’t for the life of me answer this question.

She left me with the warmest hug I have recalled in recent years and an offering of love, support, and a shoulder to lean on.

And most importantly this: “Focus very little on what he is doing or not doing. Instead, focus on what you are doing for yourself to create peace and happiness within.”

She also gave a strong suggestion that I love and forgive myself.

I had nothing to lose by trying her suggestion: focus on myself, practice peace, love, and forgiveness.

Continuing Down the Habit Loop

A year ago, I would have shrugged off her advice and continued down my habit loop.

But here I am, having tried everything to get my husband to see his faults, his habitual drug use. None of it worked. At least not long-term.

Who was I to think I could change his habits?

Did anything he offered me during our ‘truce’ cycle make me want to change MY habits? Or my addictions?

I thought hard about this.

The Power of Habit

Not so coincidentally, I recently finished reading “The Power of Habit” by New York Times journalist Charles Duhigg.

I had started the book a few years ago when I was gunning for a big promotion at work. I picked it back up recalling the chapter dedicated to the success of Alcoholics Anonymous.

But, this time listening with personal, not professional motives.

Habits Are Formed and Stored In Memory

There are several areas in the book that tackle addiction.

One statement which gave me great hope was this: “Even the most thoughtless and self-destructive cycles of behavior can change if you understand how habits are formed and stored in memory.”

There is something Duhigg calls the habit loop: the cue, the routine, and the reward.

Recalling the pattern I was repeating each time a ‘discussion’ began with my husband; I wondered if my habits during an argument had an addictive quality.

Focusing on Critiquing HIM

Before, during and after an argument with my husband I focused ALL efforts on critiquing him and blaming him.

My reactions and motives were habitual without a doubt, and I was desperate for change.

I needed to identify the three parts of my behavior that perpetuated my addiction: The Cue, The Reward, The Routine.

The Cue, the Reward, and the Routine

It’s been six months of applying this methodology to the problems in our marriage.

Small changes when initiating and responding to what would typically be heated discussions have become successes!

My husband quickly saw I was not giving in to my ‘craving’ of habitually pick him apart and instead chose a new routine to practice. I was lending him an olive branch rather than rubbing his nose in his habits.

Accepting personal responsibility to make positive changes in my habitual behaviors was changing my life for the better!

As a bonus, it also encouraged him to take steps towards change.

I am beyond grateful for this step in the right direction.

Not all our problems are solved, but I feel more love for my husband, and for myself.