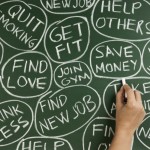 I hate New Year’s resolutions!!! I can’t be alone in this.  Personally, I don’t like taking on anything that leaves me feeling like I can fail, did fail, or like I let myself or someone else down.  It’s not that I dislike commitment to change; it’s the nature of New Year’s resolutions that are unappealing to me.

The origin of New Year’s resolutions is primarily rooted in religion dating back centuries.  The research on the success rate of resolutions is that 88% fail.  This is largely because we have unrealistic goals, don’t track our progress and eventually forget about it all together.

It’s just the second week of January and my guess is most of us have struggled to maintain any New Year’s resolutions that we’ve made.  If you are on track, you are awesome!  I wonder what led to your diehard commitment and what tools you are using to be successful.

My belief about change is that it comes when we are ready to commit, not on the first of the year.

It’s great if those things coincide but typically they don’t.  When we are truly ready for change, we have insight about how changing will benefit and how giving up will cause pain. We have a plan of action and tools to execute the change.  We usually have a support system that encourages us when we want to give up and a sounding board when we get confused or don’t see progress.

I often share with my marriage counseling clients in Boca Raton that if they are not willing to change, their life will not improve.  I am frequently assured by clients that they “will try their best”.  This is when I quote Yoda.  (Yes, I love Star Wars and all things Sci-Fi).  Yoda was in the swamp with Luke teaching him the way of the Jedi when he advised

If you hear yourself saying I am going to try, check in with yourself.

These are just a few things to consider before declaring a resolution. I would love to be your Yoda, the part of your support system that helps you clarify and reach your goals.

What Are The Reasons Why New Year’s Resolutions Fail?

The most common reason for participants failing their New Year’s Resolutions was setting themselves unrealistic goals (35%), while 33% didn’t keep track of their progress and a further 23% forgot about it. About one in 10 respondents claimed they made too many resolutions.[7]

A 2007 study by Richard Wiseman from the University of Bristol involving 3,000 people showed that 88% of those who set New Year resolutions fail,[8] despite the fact that 52% of the study’s participants were confident of success at the beginning. Men achieved their goal 22% more often when they engaged in goal setting, (a system where small measurable goals are being set; such as, a pound a week, instead of saying “lose weight”), while women succeeded 10% more when they made their goals public and got support from their friends.[9]

Babylonians made promises to their gods at the start of each year that they would return borrowed objects and pay their debts.[2]

The Romans began each year by making promises to the god Janus, for whom the month of January is named.[3]

In the Medieval era, the knights took the “peacock vow” at the end of the Christmas season each year to re-affirm their commitment to chivalry.[4]

At watchnight services, many Christians prepare for the year ahead by praying and making these resolutions.[5]

This tradition has many other religious parallels. During Judaism’s New Year, Rosh Hashanah, through the High Holidays and culminating in Yom Kippur (the Day of Atonement), one is to reflect upon one’s wrongdoings over the year and both seek and offer forgiveness. People can act similarly during the Christian liturgical season of Lent, although the motive behind this holiday is more of sacrifice than of responsibility. In fact, the practice of New Year’s resolutions came, in part, from the Lenten sacrifices.[5]